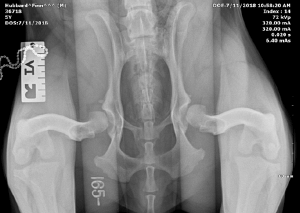 Penn Hip is a radiographic screening method for diagnosing hip dysplasia. Hip dysplasia is widely accepted to be a genetically based trait in dogs and cats. The most commonly affected dogs are large breeds and include German Shepherds, Rottweilers, Labradors, and Bulldogs. But, any dog or cat can be affected. Hip dysplasia progressively gets worse with age and causes discomfort to the animal.

Further Details
Penn Hip radiographs can be performed as early as 16 weeks old. This is especially important in breeding programs to help selectively determine the best candidates for long term health. They can be performed on pregnant animals, but not on animals that are lactating. It is recommended to wait 16 weeks after whelping.

Accessibility by WAH
Call Us